Skip to main content and our Accessibility Statement may be found in the footer of our website.

WHAT IS HAND AND WRIST RHEUMATOID ARTHRITIS? 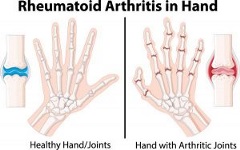 Arthritis literally means “inflamed joint”, and generally refers to any damage to the joints of the body. There are 36 joints in the hand and wrist, and several sites that commonly affected by arthritis. Rheumatoid arthritis is an inflammatory disease which has wide-ranging effects throughout the body, and especially tends to cause problems in the hands and wrists. It is much less common than osteoarthritis. The inflammation of the joint tissues leads to gradual destruction of the ligaments which hold the joints straight, and also damages the cartilage within the joints. Over time severe deformities of the hands and wrist can occur, especially if not properly treated by a Rheumatologist.

The exact cause of rheumatoid arthritis is not known, but it is thought to be an autoimmune disorder in which your body’s immune system attacks the tissues that line the joints called synovium. This same process may also attack other tissue of the body. 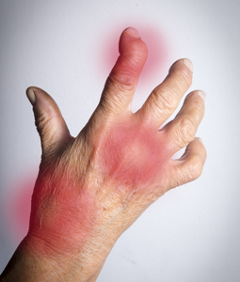 IS THERE A TEST FOR RHEUMATOID ARTHRITIS?

Your symptoms and medical history as well as an examination of your hand and wrist can help to diagnose arthritis. Often, X-rays of the hand and wrist will show signs of arthritis including erosions in the joints. If rheumatoid arthritis is suspected, additional blood tests may be needed to determine the case of the arthritis. Often referral to a Rheumatologist is made to confirm the diagnoses and initiate medical treatment.

The mainstay of treatment for rheumatoid arthritis are medications administered under the care of a Rheumatologist. The modern medications have become so effective that often surgery is not required. Other nonoperative treatment options include activity modifications, splinting, and steroid injections. Depending on the location and severity of the arthritis, surgical fusion or reconstruction of the joint may significantly improve symptoms in severe or long-standing cases. Sometimes tendon transfers, repairs, or reconstructions can also be helpful to restore alignment of the wrist and fingers.

READY TO CONFIRM A DIAGNOSIS AND FIX THE PROBLEM OR JUST WANT TO LEARN MORE?

Our Board-Certified Orthopaedic Hand and Wrist Surgeons are here to help! They can often diagnose the problem in one visit, and get you started with a treatment plan. We offer a wide variety of both nonoperative and operative treatment options.

This content is not a substitute for expert medical advice or diagnosis and is for educational purposes only.